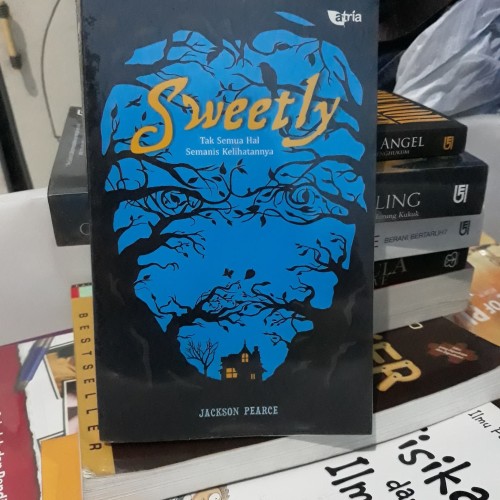 Twelve years ago, Gretchen, her twin sister, and Ansel, her brother went for a walk in the woods. They meet a terrible creature. Either magicians or monsters they don’t know. They frantically run away from the creature’s pursuit. Gretchen and Ansel survived, but her twin sister disappeared.

A few years later, they moved to Live Oak, a town that was nearly abandoned by its inhabitants. The two live in the house of Sophia Kelly, the owner of a beautiful chocolate shop. Gretchen and Ansel begin to forget their dark past, until Gretchen meets Samuel. He said that witches were still hiding, lurking from the forest, preying on girls whenever Sophia held a chocolate festival.

Gretchen decided to fight back. He wanted to know why it was his twin sister who disappeared while he survived. And he was sure of one thing: the monster would come again, and he would not leave until he was full. (goodreads)

Not Everything Is As Sweet As It Seems

After writing Sisters Red about sisters Scarlett and Rosie hunting a werewolf, Jackson Pearce is back with Sweetly. Whereas in the previous book he chose Red Riding Hood, in Sweetly Jackson Pearce wrote a story based on the story of Hansel, Gretel and the witch complete with her gingerbread house.

At first I thought I would find Scarlet, Rosie and Silas again. However, Fenris’ hunting adventure this time brought me to new characters. So for those who haven’t read Sisters Red, there’s no need to worry. Sisters Red and Sweetly’s story stands alone. Even though the two of them were still connected to the monstrous being, Fenris.

Ansel, Gretchen, Sophia and Sam are four important characters in this book. All stories are seen from Gretchen’s point of view. I don’t think there’s anything special about the character who often tells how sad he is. The fear and trauma of the forest is also not visible. Gretcehn’s character comes alive when she meets Sam and gets involved in the hunt for Fenris. Especially when he tries to uncover the secrets that Sophia is hiding. The figure of Ansel, Gretchen’s older brother, a character created almost completely devoid of emotion. Because of that too, brother and sister seemed to be an inappropriate word to give to Ansel and Gretchen. Because from the first page they don’t look like brothers. Although Gretchen repeatedly referred to Ansel as her brother at every opportunity. The impression I get is that they are more like traveling companions. No more.

Compared to the sibling bond or the love affair between Sophia and Ansel, each chapter that tells how Gretchen and Sam’s relationship is much more interesting. It was great to read all the things that happened to these two. It was Sam who made Gretchen’s presence even more pronounced.

Another Characters With Unique Approach

Sophia, a beautiful woman who owns a chocolate shop who has a lot of secrets. The only thing I’m really curious about. From the chocolates he makes to all the things he hides. Allegation after conjecture emerged. All his kindness and friendly demeanor caused a bit of fear. Just in case it’s all just a mask. I was wondering when he would unmask and start doing nasty things to Ansel and Gretchen. Sophia’s mysterious attitude almost made me believe all the accusations made by Sam or the few remaining Live Oak residents. It’s also what makes me impatient to get to the last page.

Fenris doesn’t get much of a role here. There are only a few chapters that tell of battles involving these imitations. The impression of spooky, savage, cunning and cruel is still felt. Unfortunately they look much weaker and are very easy to take down. Although they don’t appear often, their presence in the last chapters is quite exciting.